The club can be traced back as far as 1885 with the formation of an Athletic club in Collooney, one of the first in Connaught. The first inter-club contest in athletics and football, under G.A.A. rules,took place in Ward’s Field (now Markievicz Park), between Sligo and Collooney clubs, on November 15th 1885. The game ended in a scoreless draw when failing light prevented its continuation long enough to reach a decision. 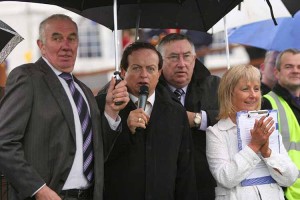 Draws for the first county championships were made at the meeting in the G.A.A. Rooms, Collooney, on February 12th 1888. Eighteen clubs affiliated, including newly founded units.Collooney affiliated on November 11th 1888 and D.P Bree and John Philips of Collooney were elected among other. In later years however, the Courthouse in Collooney became a regular venue for such meetings, and the midnight oil was often burnt for Sunday evenings after matches at one or other venue.

In accordance with the wishes of the Central Council most clubs adopted distinctive names, for example, Collooney was known as the “Collooney Fontenoys”.

In the late 1950’s and early 1960’s Collooney and Ballisodare were amalgamated and known as Ballisodare. They won the 1959 Senior league. In 1960 and 1961 Ballisodare won the league and Championship.

In 2014 Owenmore Gaels won the county U-16 A Championship, a fantastic achievement and the first at the top level at any age group for a significant period

Collooney Club is now known as Owenmore Gaels. While not competing at Senior Level at present, they have continued success with the underage boys and girls.